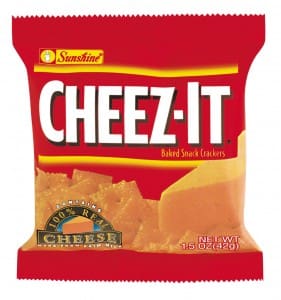 Cheez-its are amazing. Their crackers, yet their cheesy in all the right ways. It’s like a heavenly crunch with each bite. And they are staples of snack vending machines. Have you ever seen a snack vending machine without a mini bag of cheez-its in it? Probably not. But if you have, you need to contact the manager of the place who owns that vending machine because they need to change it, stat.

Cheez-its were the things I subsisted on during my retail days. In both stores I worked in, we had a vending machine in the break room with all kinds of snacks. Candy bars were too sugary and not heavy enough, trail mix was too bland, and Combos were just gross. I needed something on those 15 minute breaks that would hold me over in the mean time until the end of my shift. And cheez-its won, hands down, every time.

Unless they were sold out, which was often the case because they were that good. In those moments I would glumly choose another combination of letter and number, awaiting the day they’d be refilled.

Now, I just sit in the office with a box on my desk.  But they’ll still be my first pick the next time I run across some snack vending machines.