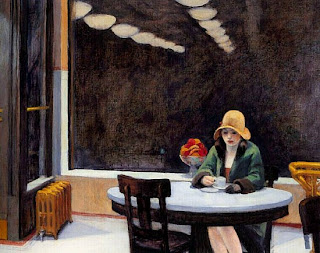 Remember the automat? If you worked in Philadelphia or New York City during the first half of the 20th century, chances are you took your lunch in a restaurant that was one big, shiny snack vending machine.

You’d enter the restaurant, make your choice, drop a few nickels in the chrome and glass machine, lift a hinged window and remove your meal, which was probably wrapped in waxed paper. Behind the windows was the kitchen, with a staff ready to replenish each window as the meals disappeared.

The automat started to disappear in the 1950s as the suburbs burgeoned and fast food restaurants came up with drive-thru windows. But once upon a time, this communal snack vending machine was America’s largest restaurant chain, serving 800,000 people a day.

Nowadays you’re more likely to select a candy bar, a bag of chips, or a yogurt from a snack vending machine than a slice of coconut cream pie or dish of baked beans. Fresh coffee’s as popular as ever, though, a true classic. You might not think of Edward Hopper’s 1927 painting or hum Irving Berlin’s automat-inspired tune, “Let’s Have Another Cup of Coffee” as you make your choice—but then again, you might.