This blog has begun to take a look at some soda pop items that have vanished from drink vending machines everywhere. Most recently was Surge, a caffeinated Coca-Cola product intended to compete with Mountain Dew. This time we’ll stay with the Coca-Cola products, investigating one of the biggest fiascos in the history of carbonated soft drinks: New Coke. 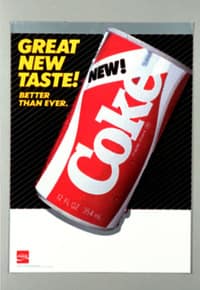 By 1983, Coca-Cola’s market share for its main pop drink was 24%, a far cry from the 60% it claimed just after World War II. The decline was due to the heavy competition from Pepsi-Cola, which was outselling the former King of Cola in supermarkets. (Coke still held the lead in fast food restaurants and drink vending machines, however.)

So, on April 23rd, 1985, the Coca-Cola Brand launched “New Coke,” discontinuing the original brand to the dismay of millions of soda-drinkers. Typically when a new soda fails, it quietly vanishes from memory, as well as store shelves and drink vending machines without so much as a whimper. The removal of Original Coke, however, was anything but.

American Southerners felt betrayed, claiming the drink was a fundamental part of their regions identity. Over 400,000 letters and phone calls were received at the coca-Cola headquarters in Atlanta. Customer relations officials for the company told level executives that many callers sounded as if they had lost a member of their families.

Less than three months later, Coca-Cola executives brought back the original Coca-Cola. New Coke continued to be sold, with underwhelming numbers, under the name “Coca-Cola II.” The soda got to 3% of the market by this point, but the introduction of “Cherry Coke” launched Coca-Cola back to the top of the Soda Kingdom, and eventually New Coke was discontinued.

One of the most well-known cancelled Soda’s of all time, New Coke can no longer be found in drink vending machines, though it remains in pop culture today, often as the butt of a joke.