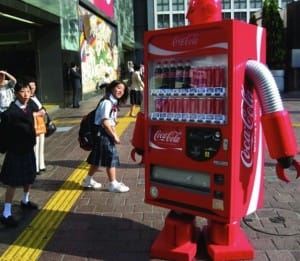 So dearly loved, Vending Machine Red is a useless superhero that does nothing but dispense soda.

Despite the hilarity of Vending Machine Red, the idea to make the experience between vending machines and users interactive is clever.  Users of vending machines favor them over stores because of their convenience and easy accessibility.  By improving not only their physical appearances, but their functionality as well will benefit vending machine manufacturers.

Although I don’t see robotic vending machines hitting the streets everywhere any time soon, it’s most likely a step in the right direction.  If vending machines are now dispensing pizza, eggs, and even bugs, who knows what we might see in the future of the vending machine world?  The Japanese sure do love their robots, vending machines, and iconic American carbonated beverages, but then again, who doesn’t?  Stay tuned for more vending machine news!