Some mornings I just need a fully cranked up caffeine explosion. I know it is not the healthiest choice but if I’ve got a few dozen articles to write then you know I’m not only hitting up our office coffee maker for the 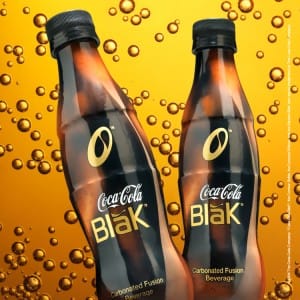 dark “angry” coffee she dispenses, I am also hitting up a soda vending machine for a Coca-Cola. Some folks think Coca-Cola in the morning is not only unhealthy but gross. Well I have to tell those folks that they are completely and utterly clueless. The combination of a crisp bubbly cola and a dark bitter coffee is just about the greatest thing to happen to man since the readily available snack vending machine.

My morning cocktail reminds me of a product Coca-Cola briefly introduced a few years ago. It was called Coca-Cola Bl?K and it was a coffee flavored cola product. It really scratched my itch for both coffee and soda in the morning all in one shot. Sadly Coca-Cola Bl?K was discontinued in 2008 leaving me mixing the hot and cold beverages in my mouth all by myself. It’s ok, in some ways I like this better.

Either way this is just another practical, maybe not so practical, use of a soda vending machine.