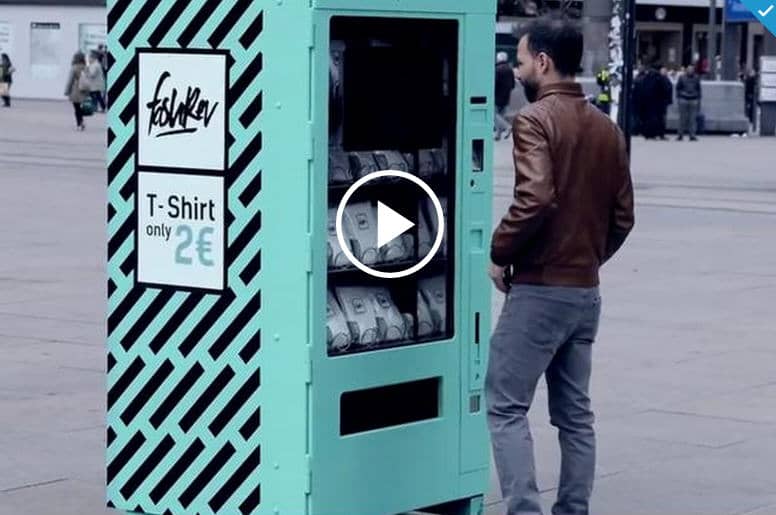 An old saying goes “once you learn how the sausage is made, you might not want to eat it anymore.” This is a timeless adage that could easily be applied to a wide range of different industries, including clothing. Now, one vending machine manufacturer is putting that idea to the test by using their automated solutions to dispense more than just the cheap t-shirts that consumers think they’re about to purchase. They’re also dispensing a fair bit of shocking truth at the same time.

The premise of this particular marketing campaign is simple: a series of vending machines are placed in heavily trafficked areas and appear to promise cheap clothing. At first glance, the machines themselves offer t-shirts that can be purchased for as little as two Euros – a great deal for anyone looking for a hot new item to wear.

Once consumers place their coins inside the machine, however, they’re greeted with something different. Instead of the shirts they were promised, they’re treated to footage of young kids and women working for just a few cents an hour in horrific working conditions all over the world. The type of people who make the shirts that these consumers were attempting to buy

After watching 20 seconds of footage, the machine then asks the user if they would still like to buy those cheap t-shirts. If not, they can choose to donate that money to Fashion Revolution, which is attempting to improve these types of working conditions in locations all over the world.

According to Fashion Revolution, a full 90 percent of the more than 150 people who put money into the machine opted to make a donation instead of buying the shirts that they originally came for. This spectacular publicity stunt was created by Unit9, a production company out of Berlin, Germany.

Though people certainly got a bit more than they bargained for with these vending machines, it’s easy to see why they’re so effective. Vending machines themselves are often greeted positively by consumers. In a way, it seems only natural to use these trusted machines to make important statements like this to such a large audience.

These vending machines may not be the most obvious way to get this type of message across, but it’s hard to argue that they’re not one of the most effective. Automated vending machines are already one of the best and most efficient ways to dispense products to customers. It will be interesting to see how many companies choose to use them to dispense cold, hard truths in the future.