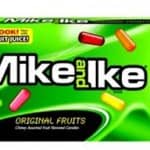 Some things are just meant to go together. Vanilla and chocolate, milk and cookies, and for anyone who has ever bought candy from a vending machine, Mike & Ike. These irresistible fruit-flavored snacks have been around for over 70 years and are synonymous with snacking for all types of customers. As part of a silly media stunt last year, the names behind the snack seemed to have “split,” with Mike and Ike choosing to go their own separate ways. Fear not, snack fans – Mike & Ike are back, with new packaging and an even sillier media campaign.

According to Vending Times, Just Born Inc has launched a brand new website for this storied candy, which reveals the sleek new look of the snack’s packaging. To complement the Mike & Ike relaunch, the website has a  comedic video of actors portraying Mike and Ike, as well as various forms of social media interactivity to help promote the new look of the classic candy. The folks behind Mike & Ike are clearly trying to make the candy more than just a staple of snack vending machines, as the re-branding makes the treat look like something that was created in today’s day and age. Do you think any other of our beloved classic vending machine snacks will be getting some sort of modern revision?